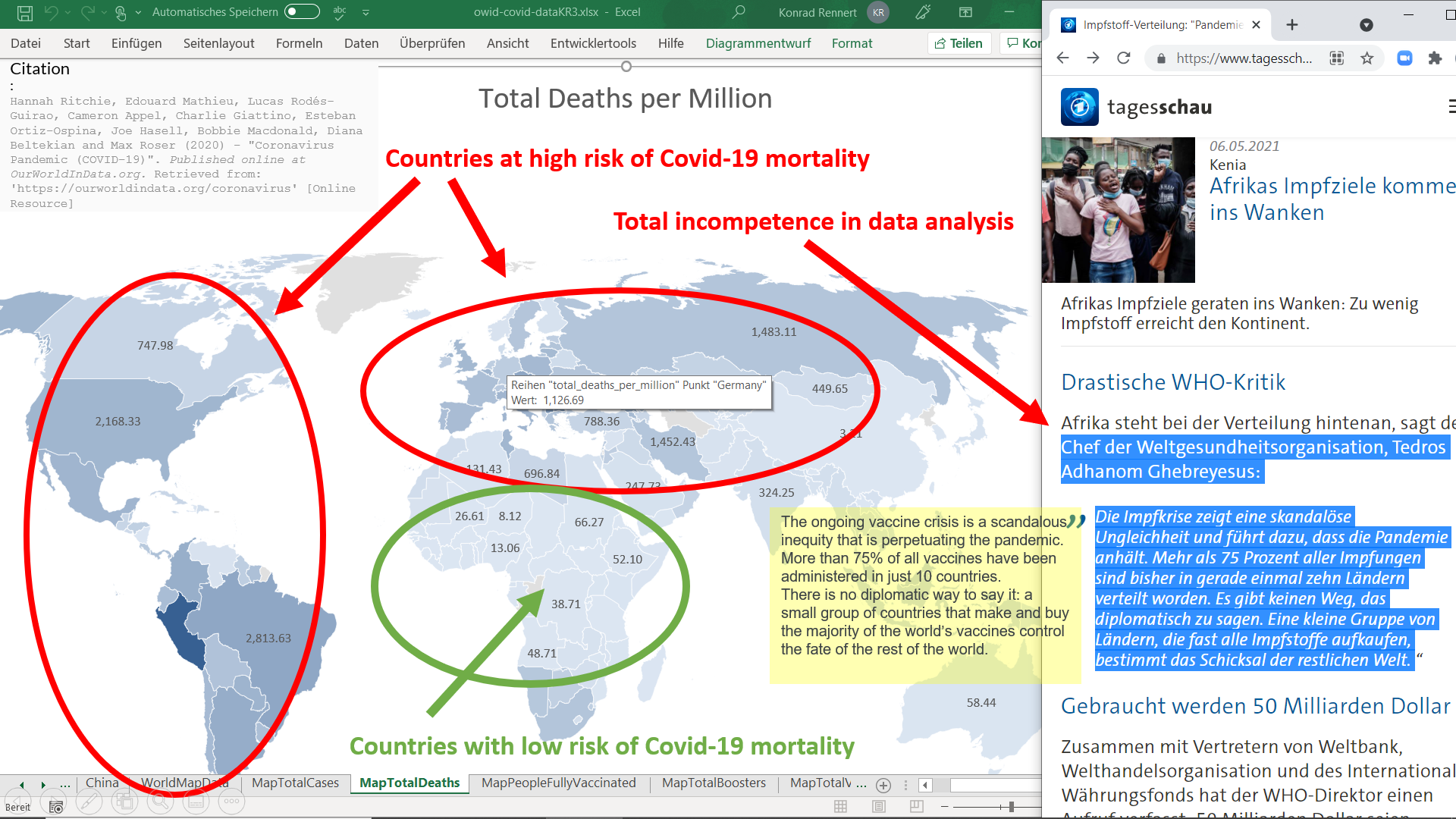 The WHO manipulates us with suppressed facts, to make BioNTech patents worthless. Journalists of German Tagesschau-News and Spiegel-Magazine multiply the coup because there obviously nobody can analyze and understandably represent the daily updated data of the Johns Hopkins University in the complete context.

Applied geophysics is practice-oriented and examines, among other things, anomalies and evaluates the data of catastrophes, which can be measured all over the earth. Around 1900, the first statements about the structure of the earth’s crust, mantle and core could be made by analyzing data from terrible earthquakes. Konrad Rennert dealt with the evaluation of geophysical data and their interpretation in his diploma thesis 40 years ago. As an IT expert, he is now transferring procedures familiar from physics to the evaluation of pandemic data. In this way, pandemic anomalies can be measured and analyzed. For background, a comparison from applied geophysics and meteorology:

At the beginning there is the measurement of data with seismographs, magnetometers, gravimeters, and barometers at defined locations on the earth’s surface.

The measured data are made comparable in standardized form. The air pressure, for example, is converted to sea level to determine the movements in high- and low-pressure areas and to present them in weather maps.

Similar procedures for comparability and presentation are required for Covid-19 data collected globally:

Pandemic data, i.e., daily counts of newly infected persons, infections resulting in death, and vaccinations administered, are collected by national institutes such as the RKI and transmitted to a central collection point such as Johns Hopkins University.

With the rule of three, students learn one of the most important basic tools in mathematics to make data comparable. The familiar procedure also applies to comparing Covid-19 data from countries with different populations. After converting to a common base, one can compare U.S. data with data from Kenya, Ireland, or Peru.

In science, an anomaly is defined as a condition that deviates from what is expected. Identifying and properly dealing with anomalies allows for predictive action.

Knowledge of higher mortality among at-risk groups led to prioritization for the duration of vaccine shortages in Germany and many other countries at the beginning of 2021. Around Easter 2021, there was a vaccination rate of about 6% in Germany. Very old and sick people were largely vaccinated at this time because of prioritization. It can be seen from the ratio of infections to deaths that the proportion of deaths around Easter had fallen by about 75% compared with the previous year.

The prioritization of the groups of people to be vaccinated was therefore important and correct. This must now also be done globally. This can be done by comparing the globally measured figures and converting them to daily deaths per million and country. Thus, one can compare the numbers of Europe and America with those of Africa.

If you look closely at the world map of daily Covid-19 deaths, you will notice an anomaly in Africa: vaccination rates are often less than one percent of the population. But the current death rate in Europe and the Americas is still 10 to 100 times that of Africa’s unvaccinated population.

The WHO director is looking only at vaccine distribution and ignoring real-world ratios in death rates. His actions allow for two interpretations: 1. he is not familiar with the normalized case numbers and thus incompetent. 2. he knows the figures and deliberately ignores them to create sentiment against countries where there is highly developed biotechnology.

Biotechnology is the innovation engine and the growth industry of the 21st century, where China has not yet caught up with the Europeans. For countries that want to save the costs of research and development in favor of competitive advantages, the permanent demands of WHO Director Tedros Adhanom Ghebreyesus are an absolute stroke of luck. His speeches have even more lasting impact because both our media and the Fridays for Future movement repeat the statements unreflectively without paying attention to the anomalies in global death rates. Frequent repetition by prominent figures suggests that the WHO is right with its incompletely presented facts and that it is time to expropriate the European patent holders. The US President has already been stormed, the German Chancellor not yet: https://www.aerzteblatt.de/nachrichten/125563/Debatte-um-Impfstoffpatente-vor-Treffen-von-Merkel-und-Biden

Based on his experience in evaluating data, Konrad Rennert offers an online course with face-to-face sessions via video conference. The target group is journalists and young activists with basic Excel skills who want to objectify the reporting on future world health summits based on “Data on COVID-19 (coronavirus) by Our World in Data”. At the end of the training initiative, which is scheduled to last two months, all participants should be able to evaluate the available data from “Our World in Data” and present the results in a generally understandable way. The cost of access to the shared online platform with permanent video conferencing is 99 EUR.